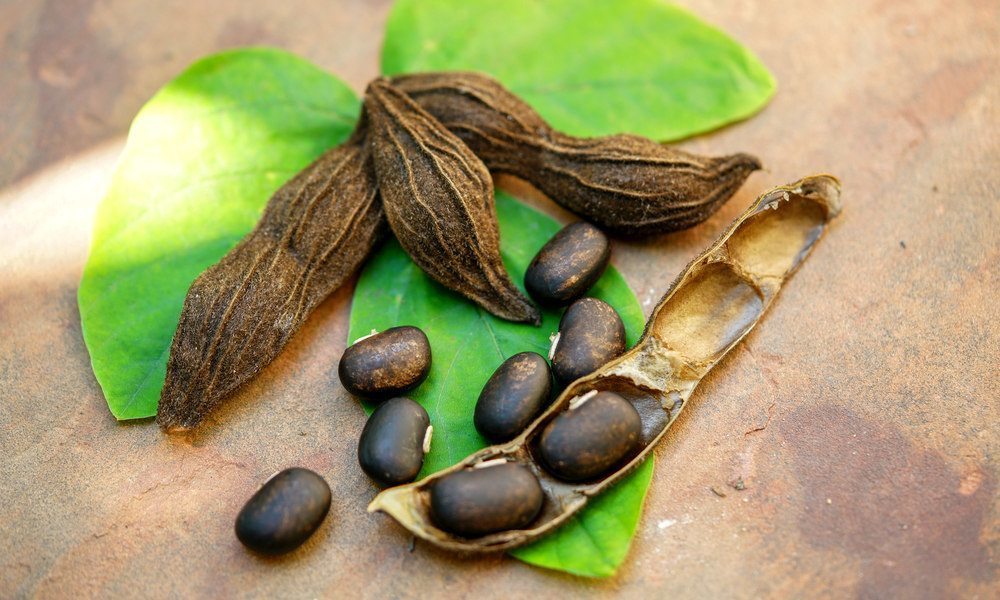 Mucuna Pruriens, also known as cowitch, Itchy Bean, Velvet Bean-just to name a few-is a striking bean. This climbing plant is found in tropical areas of India and Africa. The legume has beautiful dark purple flowers and pointed green leaves. It has numerous health benefits linked to libido, Parkinson Disease therapy, and mood among others and is for these reasons quickly becoming very popular in the Western medicine world.

The supplement is especially popular among those who like to work out because of its efficacy in bodybuilding.

Velvet bean seeds are very rich in carbohydrates, minerals, fiber, lipid, and proteins. They are high in sterols, novel alkaloids and saponins.

All Mucuna species’ seeds are highly concentrated in L-dopa and Mucuna Pruriens seeds contain about 7-10% L-dopa. Levodopa is a bioactive chemical which is a direct forerunner of dopamine, noradrenaline, and adrenaline. It has been used in traditional Ayurvedic Indian medicine in the treatment of Parkinson Disease.

Originally, called a “shaking palsy”, Parkinson disease is a brain disorder that leads to gradual loss of muscle control. Its signs and symptoms are mild at first and can be overlooked easily. Common signs of this order are tremors and stiffness.

Parkinson’s disorder is associated with the reduced production of an important neurotransmitter; dopamine. Fortunately, Mucuna has been an Ayurvedic therapy for many years and has incredible influence on dopamine levels. Preliminary studies show that L-dopa in its natural form delivers better results than the artificial levodopa and has no side effects.

Subjects in two studies that used 15 grams and 30 grams respectively have shown a decrease in symptoms. These dosages were effective and did not cause severe side effects. However, it is advisable to take only up to 5 grams, and with a lot of water.

2. Mucuna Supplement Is An Aphrodisiac

Testosterone is a vital hormone for sex drive and performance. Mucuna has been used as an aphrodisiac for very many centuries. Scientifically, this herb contains a hormone with reproductive, metabolic and immune-regulatory functions known as prolactin.

Normally, prolactin neutralizes testosterone in the body, hence reduced sexual interest. However, this is moderated by the high dopamine levels from L-dopa found in the velvet bean extracts. It also increases testosterone levels. Both men and women have reported increased sex drive after taking this supplement.

Modern life can sometimes be frustrating, and that comes with lowered dopamine levels. Many people report improved alertness and mood boost after consuming the itchy bean supplement or powder. According to studies, L-dopa in cowitch intensifies dopamine in the brain’s cortex.

ALSO READ: Healthy Spices: 13 Spices That Can Boost Your Health

Scroll down for more uses and health benefits of Mucuna Pruriens.

What are the Health Benefits of Mucuna Pruriens?

According to research, Mucuna Pruriens ensures all neural and cognitive functions take place as they should, hence protecting the brain. Studies done on animals have proved the antioxidant action noteworthy in defending the brain from oxidative damage by free radicals.

This mechanism is very simple. Free radicals have an unpaired electron, making them uneven in the body. Antioxidants, on the other hand, give our electrons to the free radicals hence neutralizing their effects, particularly on the brain.

Additionally, Mucuna fights complete redness in the brain, which is a major player in brain degradation.

· The Relationship between Mucuna Pruriens and the Impact of Stress

· Mucuna Pruriens as a prophylactic to snake venom

Velvet bean extracts have been used by Nigerians as a pre-treatment for poisonous snakebites. Studies have been carried out on rats in a bid to examine the protective impact of the supplement against the toxin.

It was realized that the itchy bean prophylactic has a protective effect on the heart against the venom. This means the supplement helps maintain cardiovascular functions.

Other Benefits of Mucuna Pruriens May Include:

Mucuna Pruriens Side Effects, and Warnings

What are the risks of Mucuna Pruriens? This natural supplement has several known side effects, especially with the wrong dosages.

You should avoid skin contact with the itchy bean pods. Naturally, the pods have fine orange hair covering that can lead to blisters and inflammation.

5 grams of kapikachu powder has been used to effectively treat infertility and Parkinson’s disease. It is recommended to start off slowly with a low dosage; it will help you monitor results for the first few days. Consuming a huge dose for the first time can lead to serious reactions.

Although the supplement can be consumed as an isolated food product, cooking interferes with trypsin inhibitor in the legume.

While Mucuna Pruriens supplements are considered safe, it is advisable to seek medical guidance from your physician before starting any dosage. Discuss your current medical situation and (if any) the reasons for choosing to take the supplement with your preferred doctor.

My name is Tom Wells I have been putting health boosters, nootropics and superfood to the test for many years and written reviews about it all. Right now I’m writing for SlowfoodNation.org, a health blog doing reviews and putting together information about supplements, superfoods and nootropics.