Why You Should Consider a 72-hour Coconut Water Fast Too

Recently, my husband and I did a 3-day or 72-hour coconut water fast in the name of science and health. While many people believe fasting is an unhealthy and dangerous process, if you are no stranger to the natural health world then I’m sure you have heard about the amazing, positive health effects fasting or intermitted fasting can have on your body. If this sounds too hippy-dippy or surreal for you, science actually agrees that it’s good for you.

Though we have done veggie or fruit fasts in the past, having only water or coconut water is something we never did. Inspired by a scientific study we saw passing by claiming a 3-day water fast resets the immune system and helps fight disease, we were eager to find out more and test this for ourselves.

While having no food for 3 days may sound extreme and crazy to you, fasting has been part of many cultures and religions. Think of the Christian season of Lent, the Islamic holy month of Ramadan or the Jewish holy day of Yom Kippur. Buddhism, Judaism, Taoism, Jainism, and Hinduism are other examples of religions and philosophies that include fasting in their rituals or lifestyle.

Fasting has been around for ages and will continue to be a regular practice for many cultures in the future. But what does science says about this ancient practice?

Are we eating too much?

Yes, we are!!! Have you ever written down or displayed all the food you eat daily? I’m sure you will be amazed by the volume of it.

Think our early ancestors had plenty of wild foods to munch on? Think again!

Over the years we have been accustomed to the convenience of markets and grocery stores that sell plenty of foods from all the corners of the world. Our ancestors, however, didn’t have the luxury of a grocery store with a million options to fill their bellies. Though you might have a Flintstone-like picture of huge T-bone steaks and berry feasts in mind when thinking of our ancestors, the truth is they did not always have access to food. They ate when they found food and (involuntarily) fasted when they didn’t.

Similar to animals, our ancestors didn’t eat breakfast, lunch, and dinner daily. Sure they feasted on the catch or find of the day. But don’t think they were so lucky to have some every day. In between each catch or find, they often went without food for long periods of time.

The science around fasting

According to many studies, fasting for just 3 days can have a tremendous effect on the overall health. According to one study supported by the National Institute of Aging of the National Institutes of Health, found that fasting not only boosts the immune system but regenerates it entirely, shifting stem cells from a dormant state to a state of self-renewal. Which will give you a good chance at living a long and healthy life. As noted by the researchers, this is the first evidence of natural intervention triggering stem cell-based regeneration of an organ or system.

The authors of the study focused their research on people receiving chemotherapy. Imagine the preventive, immune-boosting, and regenerative effects fasting can have on all people.

Fasting to reset and renew your body

In conclusion, the study reported that these findings may have major implications for healthier aging. When we age, the immune system decline contributes to increased susceptibility to many diseases, including cancer and heart diseases. The two leading causes of death worldwide. Furthermore, these scientists noted that prolonged fasting cycles — or periods of no food for two to four days for six months — can kill older and damaged immune cells and generate new ones.

“We could not predict that prolonged fasting would have such a remarkable effect in promoting stem cell-based regeneration of the hematopoietic system,” said corresponding author Valter Longo, Edna M. Jones Professor of Gerontology and the Biological Sciences at the USC.

“When you starve, the system tries to save energy, and one of the things it can do to save energy is to recycle a lot of the immune cells that are not needed, especially those that may be damaged. What we started noticing in both our human work and animal work is that the white blood cell count goes down with prolonged fasting. Then when you re-feed, the blood cells come back. So we started thinking, well, where does it come from?” he added.

Could fasting be the answer to a healthier and longer life?

Prolonged fasting forces the body to use stored glucose, fat, and ketones while destroying old white blood. The depletion of white blood cells then triggers the regeneration of new ones. Additionally, fasting reduces the enzyme PKA (an enzyme associated with aging and longevity) and IGF-1 (a growth factor hormone linked to aging, tumor growth, and cancer).

Furthermore, the research also implies that fasting can have positive effects for those with autoimmune diseases. Since my husband has Multiple Sclerosis (MS), we were eager to try this fast and see what all the fuzz is about.

Scroll down for more info and learn how to do a coconut water fast at home.

Though I’m no stranger to fruit and veggie cleanses, having nothing else but water sounded a little too crazy. Therefore, we decided to add coconut water to the game! I know, the research said water only, so that will be our aim for the future. But for now, we’ll stick to the coconut water.

Coconut water fasts have also shown to have powerful cleansing benefits and immune-boosting and regenerative properties.

How does it work?

A coconut water fast is nothing more than abstaining from all food and drinking only coconut water and water for a minimum of 72-hours. Although coconut water fasting is not as popular as other fasts, it is equally effective. It might not be for everyone, though. We are very blessed to have so many coconuts growing around us. Since many store-bought coconut waters add sugar, preservatives and other additives, doing a water or lemon water fast might be the better option for you. If you decide to the coconut water fast, here is a great overview of good coconut waters shared by the Food Babe. 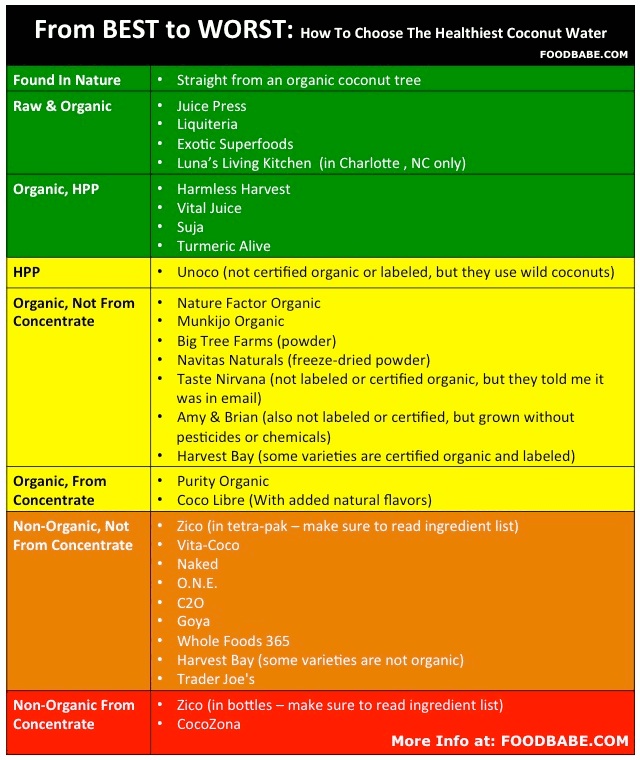 This is how our coconut water fast looked after a day and a half!

While I was fully prepared to experience the feeling of true hunger, I didn’t really come to that. Although the desire to eat was there, though. Strange for a foodie like me, right? Maybe a water fast will get me that experience.

Does that mean it was easy? Not at all. The first day was peanuts. I even met up with two friends for lunch. They had some beautiful food and I had 2 coconuts. The next day I felt focused and energized in the morning, but by the time we reached 2 pm all my energy was drained and I could no longer focus on writing and working.

Right from the start, you will pee a lot and your sweat might smell a bit more than usual. But that’s fine since that’s a good sign of toxins leaving your body.

For both my hubby and me, fasting caused mild headaches at some points in the morning. Which could be due to the going-without-coffee-in-the-morning syndrome.

Just after the fast everything tastes so good!!!! Unfortunately, the heightened taste sense did not last so long.

The morning after the fast, the first green smoothie and salad we had tasted just wow. A true feast and explosion of flavors. I can’t really put the feeling or taste in words, but it’s like discovering a whole new world of flavors and smells.

All in all, this was a great experience and we will keep repeating it from now on!

The days after, we both felt really energized, focused and ready to tackle the world! There is some kind of a clear feeling in my head that I can’t put my finger on….

If this sounds too crazy for you, CLICK HERE to access a 10-day whole food detox course to help you get rid of all toxins and reset your system.

We’re in for more!!!!  Do you have experience with water or coconut water fasting? Feel free to share your thoughts with us in the comment box below!